According to an Eurocare report issued for the European Union, the rate of people killed in road traffic accidents in the fifteen member countries of the Union, between 2000 and 2010, was approximately 40,000 a year.
Nearly one third of the deaths and disabilities caused by motor vehicle accidents were due to alcohol.
This enormous burden upon the community needs to be reduced; some of the tougher measures the EU want to implement include a lower blood alcohol concentration limit, the introduction of unrestricted powers to breath test, and the automatic and immediate suspension of a driving licence if a tested driver is over the legal limit.
According to the Road Safety Authority (RSA) of Ireland, the UK’s drink drive limit of 0.08 (80 milligrams [mg] of alcohol per 100 millilitres of blood) and Malta’s limit of 0.09 (90 milligrams [mg] of alcohol per 100 millilitres of blood) are now the highest in the EU. All of the available evidence from research indicates that reducing the legal limit of Blood Alcohol Concentration (BAC) from the old limit of 0.08 to 0.05 will reduce the risk of being involved in a road traffic collision, and consequently will save lives and prevent serious injuries.
In terms of per capita alcohol consumption, Ireland is among the highest in the EU. The existing legal limit for fully licensed, Category B, drivers is 0.05 as per EU standards and the limit drops for professionals, learners and novice drivers to 0.02.
According to the Eurocare report, research has demonstrated that tasks related to driving performance are affected at BAC levels much lower than those normally associated with legal intoxication.
Society’s attitudes are changing, however, and drink driving is no longer considered something to brag about, even though it still happens frequently: in 2006, an RSA study asked drivers to rate drink driving, in terms of shamefulness on a ten point scale (where one is not shameful and ten is extremely shameful) and also how it compared to other antisocial behaviours. Of the people surveyed, 80% rated drink driving as extremely shameful and, indeed, considered it worse in comparison to shoplifting, adultery and tax evasion. 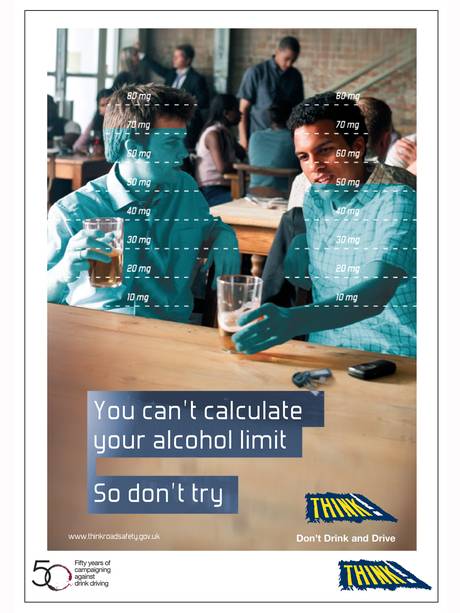 Don't drink and drive campaign - source: http://think.direct.gov.uk/
One of the perennial myths concerning drink driving is that you can drink until you reach the legal limit, knowing precisely when you have reached it. The reality is that you can never be entirely sure; it depends on a number of determining factors, such as your weight, age, metabolism, whether you have eaten and even your stress levels while drinking. It isn’t just about the quantity of alcohol you drink in measurable units.
Another dangerous myth is the one about the “morning after”: most people are convinced that they can drive the day after a drink, even though they are still, more than likely, very much under the influence of alcohol.
There is only one fail-safe approach to drink driving: never drink and drive.