Mobile phone use behind the wheel: some eye-opening campaigns

The use of mobile phone behind the wheel is one of the unfortunately many distracted driving habits that are contributing factors in many crashes that could unfortunately lead to injuries or to fatalities. The use of smartphones while driving is particularly dangerous as it does not only take away the driver's mind off the task of driving, but also implies a manual distraction (hands are not on the steering wheel) and a visual one (eyes are off the road).

Some campaigns that have been created to sensitize drivers on this issue have really identified those distractions and used them to produce an impacting message - we hope that might be effective so here you have 3 mobile phone use campaigns that impressed us. 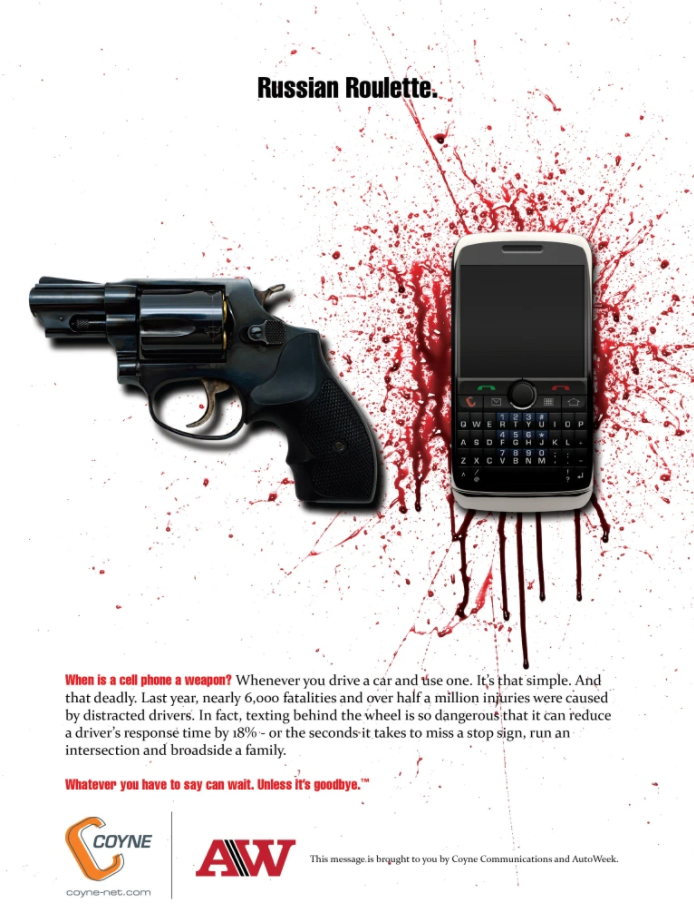 "As simple as that". This 2010 campaign used startling graphic images to grab the public’s attention regarding the dangers of distracted driving. The Russian Roulette campaign was created by Coyne Communications, a marketing firm in Basking Ridge, New Jersey. The ad series, created in partnership with Auto Week, was designed with the hopes of shocking drivers and changing behavior behind the wheel.

This campaign was created by Mayor’s Youth Council Research Committee with the Alberta Motor Association (AMA) to raise awareness and combat the issue of distracted driving in young people by using Internet slang and alluding not only to those who text behind the wheel but also use social media while driving. Using your smartphone while driving is definitely not something funny.

While this might seem at first a broken phone screen, the poster hints at the collision that might take place if the driver texts and drives. We all know autocorrect is used to help us writing quickly and that if often fixes mistakes, but in this case the campaign underlines actually doing it behind the wheel is itself a huge fail.

Photo by melissa mjoen on Unsplash