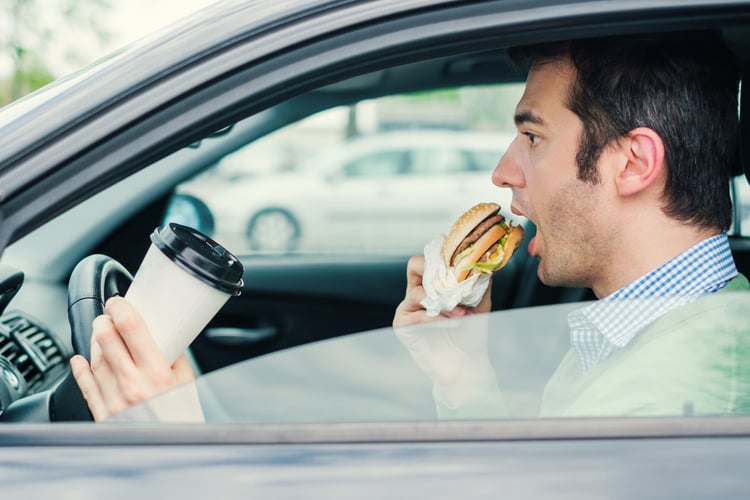 Drivers might feel at times that they can do more that just driving their vehicle and it is unfortunately not uncommon to see or imagine people behind the wheel doing other things, such as eating or texting a friend. Whether this is due to the rush and the stress that is typical of our daily life, it is good to remind that multitasking behind the wheel is dangerous and that it is not a "real" multitasking: what you are actually doing is rapidly switching from one task to another or, in other words, you’re not actually focusing on multiple tasks at once like you think you are—you’re focusing on one task and ignoring all others until your focus shifts again because your brain can only focus on one thing at a time.

What happens then if you "multitask" while driving? Performing other tasks while behind the wheel of a car would mean that you’re not focusing on the road anymore, but instead would be concentrating on the other thing you’re doing, which could increase your chances of causing a road accident - and facing the consequences of distracted driving.

The research work "Driving and Multitasking: The Good, the Bad, and the Dangerous" aimed at determining how a second activity affects the ability of a driver to control a vehicle. In order to carry out the study, a driving simulator was created with two different scenarios: in the first one, participants had to drive with no traffic in the driver's lane, while in the second one there was substantial traffic with some other vehicles that necessarily had to be overtaken.

Then four different secondary tasks were suggested in the different scenarios: no activity, radio listening, answering radio quiz questions or using a tablet. The latter resulted in the most dangerous performance, while, interestingly enough, passively listening to the radio or answering questions for a radio quiz led to the best driving performance. Driving as a single task did not produce better performance than driving in combination with one of the radio tasks, and even tended to be slightly worse.

These results suggest that drivers switch to internally focused secondary tasks when nothing else is available during monotonous or repetitive driving environments. This mind wandering might potentially have a stronger interference effect with driving than non-visual secondary tasks, so it is important to check in with drivers and consider their wellbeing as part of their health.