WHO Road Safety Report 2018: the fight against deaths on the road continues

At the tail end of 2018, the World Health Organisation (WHO) published a detailed report on the perennial issue of road safety.

This year’s edition of the report, available online, has focussed in particular on the wholly unacceptable number of deaths on the roads worldwide as this is a trend that is not decreasing globally (though it is in some individual countries). Huge steps have been made with regards to motor vehicle legislation in various countries of the world to try and minimise the problem as much as possible; which suggests that, without similar regulations, we would be dealing with even more depressing statistics than we are stuck with already. What’s more, it is also true that, despite low-income countries causing the most concern when it comes to tackling road safety, the problem is stubbornly persistent and has not improved even in some middle-income and high-income countries, as the chart suggests:

The number of road traffic deaths is far from evenly distributed throughout the world, with the highest fatalities recorded in Africa (26.6/100,000 people) and South-East Asia (20.7/100,000 people); and all in all, it has been estimated that an unbelievable 1.35 million people are dying each year on the road. We are therefore very far from the Sustainable Development Goal (SDG) 3: target 3.6, which aims at halving the number of road traffic related deaths by year 2020. Road traffic accidents account for 13% of all deaths in low-income countries and 7% of all deaths in high income countries—the 8th most common cause of death in the world,

According to the numbers published, every 24 seconds somebody dies on the road. To sensitize the public to the issue, the WHO has created a report data visualization page where we can actually see just how frequently a road users dies in the world as it ominously countdowns the average time between fatalities and adds it to the growing total.

There are actually five areas of particular risk where the WHO recommends being extra vigilant when it comes to road safety, with three of them possibly applying to professional drivers. Managing them can definitely make a difference to on-going safety—so we recommend you follow suit in applying them to your fleet:

The other two areas of safety focus, not particularly applying to fleets but to road users generally, are the use of motorcycle helmets and of child restraints.

Considering the uncomfortable statistics regarding global road safety, it is extremely important to act now or the SDG target will not be reached by the 2020 deadline. 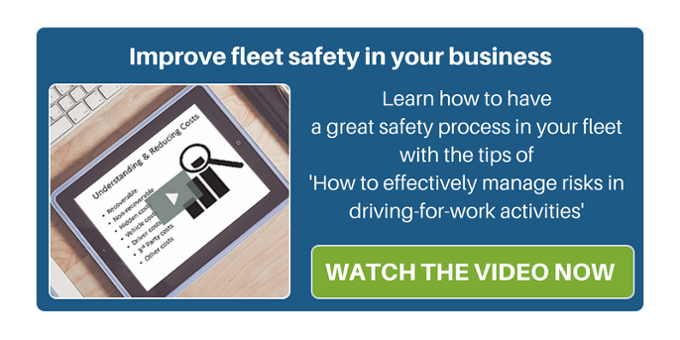